When your iOS app uses Markdown documents, why can’t we just transform them into natives view? What if instead of writing Swift UI code, we build a custom viewer app, which can even be run from Xcode Live Preview Canvas?

Just look at what you can do with it:

In this story we are going to cover the following topics:

In case you want to see the full library, checkout the GitHub repository CoolDown, our own Markdown parser at techprimate, which also includes a work-in-progress library CDSwiftUIMapper.

It’s highly recommended that you read my previous article “Creating your own Markdown Parser from Scratch in Swift” as we will reuse concepts from there.

Anyway here is a short recap of the explained concepts:

Usually an example is easier to understand, so please take a look at the following one:

The styling is done by GitHub Gists. The actual raw document looks like the following:

Now when parsing the document using the markdown parser (in my case it’s CoolDown), the AST reprsentation looks like the following:

Perfect! Three of our four steps are quite simple to understand, now lets get into the last step: converting the AST nodes into SwiftUI views.

When parsing our tree, we have to think of a mapping function:

As an example, the list node from the previous code snippet, might be mapped to the following SwiftUI view code:

As you can see, each node is mapped to a view structure:

It is necessary to add a mapping function for every single node type, and manage it in an efficient way. The easiest way to do so is creating a mapper class, which takes an array of nodes as the input, manages a set of mapping functions and *outputs a SwiftUI view *structure.

For all you (aspiring) computer scientists out there, the applied software pattern is also called the Strategy pattern, as the function always has the same signature, but differs in its implementation. [Strategy pattern - Wikipedia

In this article I will call them Resolver and they are defined like this:

You might be wondering, what is going on, so here a quick overview:

The different resolvers are managed in a mapper class:

The resolvers dictionary is a one-to-one map of different node type identifiers, to their corresponding mapping functions.

During the implementation of this class we also hit the first limitation:

Which Result type should I use for the resolvers return value? One resolver might return SwiftUI.Text while others might even return a custom view. It is also not possible to use the super type View as it is a protocol and the compiler will start to complain:

Unfortunately I couldn’t find a more elegant solution (yet), other than type erasing. Therefore it uses AnyView which wraps any SwiftUI view into an untyped view structure.

A great feature of the addResolver function, is strong generic typing outside the library, such as this example mapper:

EDIT 18.09.2022: Using type-erasure was never the best implementation.Instead use @ViewBuilder and switch to resolve all mappings.

Building an UI from resolved nodes

At this point we have successfully parsed our document into a node structure, with a mapping utility ready for being filled with resolvers.

Our first resolver is the one for list which contains a list of nodes. A simple resolver to get to the desired VStack structure would be the following:

This is a great example of the so called ContainerNode, a node which contains more nested ones. We iterate each nested node mapper .resolve(node: node) which takes care of looking up the necessary resolver. In the class CDSwiftUIMapper mentioned above, you have probably noticed the fatalError("not implemented"). This is a great time to implement them:

The function resolve takes the nodes set in the mapper during creation and resolves each one into an AnyView and combines them in an ForEach. If it misses a node resolver, it returns a warning text, as crashes should be avoided and are super hard to debug in Xcode Previews.

As a final step (to get to the original GIF at the beginning) add we add a new view MarkdownViewer which converts the input parameter text into nodes and after mapping wraps them in a ScrollView:

Combine everything together and you have created a markdown viewer in SwiftUI! 🚀 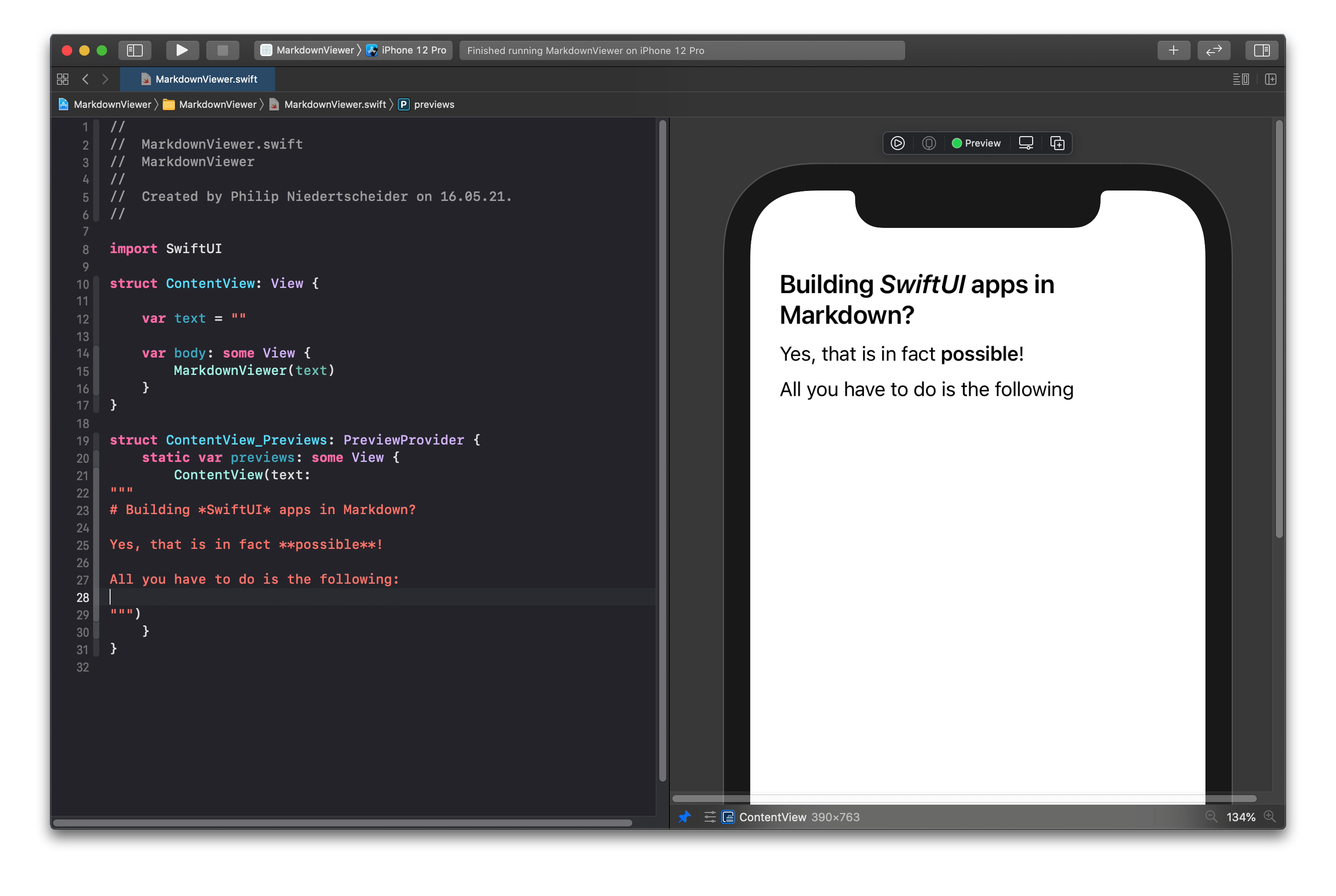 Isn’t this cool? It is possible to build SwiftUI apps using Markdown 🤯 How practical this approach is, well, you can decide that yourself.

Here a few thoughts on what’s next: