You know Markdown, right? That text format which uses funky characters like ** or > to create well formatted documents? Awesome! Many platforms use it on a daily basis, so you will eventually use it too.

Now, what if you need a markdown parser for your Swift application? Well, we could just use one of the well-tested ones (which can be found using your favorite search engine on GitHub), but instead… you can also create your own version. 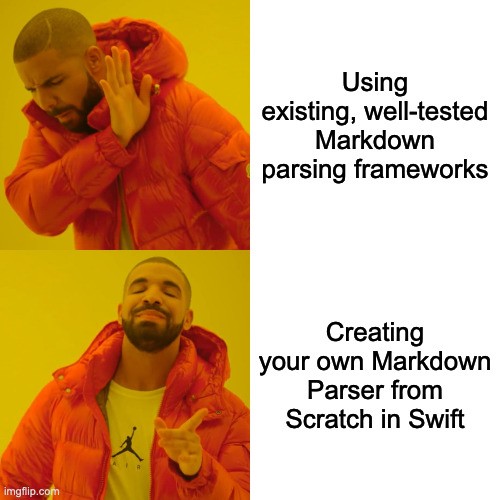 All jokes aside: if possible, do not reinvent the wheel. If an existing framework with an active maintainer fits your needs, use that one. At techprimate we decided to create our own solution, CoolDown, because an upcoming app uses Markdown with many custom extensions, therefore it was more convenient to have full control.

This article will also give you a general idea on how to parse a structured plain text document. Here a quick outline what we will cover:

Markdown documents are written entirely in plain text, and any additional assets are only added as URL references.

Over the years multiple Markdown specs surfaced and many platforms (e.g. GitHub) adapted and extended it. Eventually it got standardized to remove ambiguity. For this tutorial, we will use the CommonMark 0.29 specification as a reference, as it is quite a common one (pun intended).

A major structural element of the document is the double-newline/empty line, as it structures our document into a sequence of blocks. Just look at the following example:

It is quite obvious that these should be considered as two blocks, but the following is only a single block:

These blocks can be categorized even further into Leaf Blocks (e.g. headings), Container Blocks (e.g. lists) and Inlines (e.g. code spans). I won’t go further into detail for now, as you can just look at the detailed CommonMark documentation.

Now we need to take a closer look at a single block:

This is still a single block, but it consists out of 5 inline blocks/elements:

Structure of a Document Parser

Alright, at this point you have some basic understanding of what data we are dealing with. Now you need to know how to parse a plain text document in general. A rule of thumb:

Break the text it into the smallest possible chunks, before processing each chunk

As mentioned before, our document consists out of a sequence of blocks. This already makes our lives way easier, as we can now analyze the blocks individually.

Next we know that none of the Markdown elements span more than a single line. Even the following example, a multi-line code segment, can be seen as three “sub-blocks”. To simplify our naming, I will from now on refer to them as Fragments:

We already broke down a large document into blocks and afterwards into fragments. As the content of the individual fragments varies, we can not break it down any further.

By keeping this structure in mind we can create the following basic algorithm:

Your time has come. It’s time to write some code 🔥

As our library is entirely logic based and works as a black box (text as input, parsed document as output) this is a great use-case for Test-Driven-Development (TDD). The main idea of this development strategy is first defining a test case, which will fail on purpose, and then writing the code to fix it.

As the first step create a new Swift package MarkdownParser using either your Terminal of choice and swift package init –type library or using Xcode:

Next, open up MarkdownParserTests.swift and create your first test case:

This code is straight forward, but for the sake of the tutorial I will explain it: First define the input text, then create a parser using the input text and call parse() to convert it into a node tree. Finally we write a test assertion to check that it returns the expected result.

Xcode will usually tell you about the syntax issues rather quickly:

The only solution to fix this situation is implementing the class MarkdownParser which fulfills the test expectations:

and changing our parser to satisfy both test cases:

Note: In this tutorial I am using an enum to define the different nodes, because of it’s simplicity. You can also create struct’s or even classes to return the parsed nodes.

Stepping up our parsing game

Alright, alright, alright… enough with the simple text parsing. By now you hopefully understand how TDD is working, so let’s jump a few steps forward and create a more advanced test case:

The first step to deal with this complex example is creating the necessary node types:

Now remember the algorithm in the introduction: First we need to split the text into blocks to then iterate them. We do this in a testable way by creating a so called Lexer , a class to split our raw content into smaller chunks (the so called lexems). Additionally it implements the iterator protocol, to use a standardized looping mechanism:

Our Markdown parser is growing and the first two steps of our algorithm are already implemented:

Good job with the progress! Let’s take care of step 3 and 4 next:

Create another class BlockParser which will iterate every fragment in a block and parse them individually:

Adapt the MarkdownParser.parse() to use it for each block and finish step 3 of our algorithm:

Parsing fragments by their characters

Up until this point the structure of the document was well-known (blocks split by empty lines, fragments split by newline characters).

For the actual fragment parsing logic you can choose from multiple approaches (such as using Regex’s) but in this approach we are using a character-based lexer.

The fragment lexer differs from the previous ones, as it iterates the content by each character and also offers additional methods to peak at further characters (does not increase the iterator counter) and rewind to move the iterator backwards.

Using all the knowledge we gathered during this tutorial, let’s create the last missing parser, the FragmentParser. This class is going to use our FragmentLexer and identify the different nodes by specific characters, as declared in the specification. In the first version, we concatenate each character into a .text(...) node to fulfill our second test case:

This works fine for the simple use case, but for more complex use-cases we need an additional data structure to efficiently track the abstract nesting position inside the fragment.

To understand what is going on, we think through the parsing logic of a more complex block (even more complicated than the previous ones):

Should map the following structure:

Our fragment parsing algorithm will therefore work something like this:

Please keep in mind, this is pseudo code and should only help to understand what is going on.

After removing the last asterisk, the parsed structure will look a bit different:

Unfortunately this also depends on our parser, as the following output could be valid too:

This is a software design decision you have to make. In case you are curious how I implemented it, checkout the BoldCursiveInlineSpec.swift of CoolDown on GitHub.

As an efficient way of tracking the nesting, I decided to use a stack, which adds an additional node on the beginning characters (such as **) and removes it from the stack when the closing characters are found.

To not increase the complexity of this tutorial any further, I will not cover the exact implementation of the stack mechanism. If you want to know now more, CoolDown is very well commented.

Finishing up our parser

Alright, this is the final FragmentParser for the scope of this tutorial:

The code is commented so it should be self-explanatory. In this example you can also see why our FragmentLexer has additional peak and rewind methods.

When you run the test case once again, they still fails with the following result:

If you are fine with the two blocks being merged into a single one, good job, change the tests and you are done 😄

If not, change the MarkdownParser.parse() method to group the nodes per block and if more than one block was found, it shall wrap them in paragraph nodes:

You made it! Congratulations 🥳

This tutorial only covered a small subset of the possibilities in using and parsing Markdown. Obviously the three tests are not enough to covert the implemented functionality, so make sure to write more tests!

I also referenced our custom parser @ techprimate called CoolDown multiple times, which is still a work-in-progress, but is eventually getting production ready. We decided to build it as an Open Source Swift package, so checkout the GitHub repository.

Next to actually writing a small working parser, you also got more insight into the document format itself. Now you should be able to pick it up from there and continue working on the parser.